opens in a new window

A Time to Celebrate 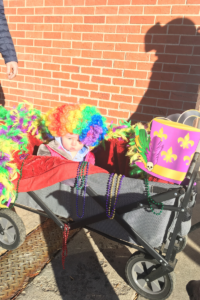 By now in the South, everyone has lovingly removed their Christmas ornaments from the tree and put up their purple, green and gold. 💜💚💛

Mardi Gras season is in full bloom with floats and parades, balls, costumes, picnics and plenty of excitement.

We all know it is a time to party, but what is it really all about? And why are we even talking about it at St. Vrain Cidery?

Many of you may already know but Cindy Landi, our CEO, hails from the South. We need to celebrate Mardi Gras or Cindy will lose her Southern status. Jokes aside, Mardi Gras is an important holiday worldwide with some of the most extravagant displays of human creativity and community.

We are exCIDERED to spread its joy and culture to Colorado. Who couldn’t use some Southern warmth in the dead of winter? We’ve compiled the top traditions to know for Mardi Gras.

So whether you’ll celebrate by decorating a wagon and joining as at Longmont’s Tiny-est Parade (named for local legend Tiny, the parade’s Grand Marshall) or making masks with us at craft nights – here are the main things you need to know about the unique history and culture of Mardi Gras. 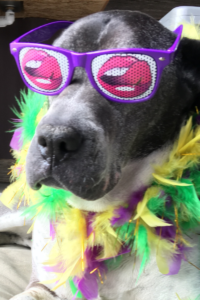 The 12th day after Christmas, on January 6, is called Epiphany. It is the day the Three Kings visited baby Jesus and it is the day that officially closes down the Christmas season. It also kicks off Carnival season around the world.

Although some people use Carnival and Mardi Gras interchangeably, they are actually different things. Carnival is the time after Epiphany and before Ash Wednesday filled with parades, balls and other celebrations leading up to Mardi Gras.

Elaborate costumes and masks allow people to put aside their daily lives and experience a heightened sense of social cohesion.

Mardi Gras is always the Tuesday before Ash Wednesday. Carnival officially ends at midnight on Fat Tuesday and Lent begins.

Mardi Gras is a French term for Fat Tuesday, called so for it is the last day of indulgence before the Lenten period of sacrifice. It is the last day of self-examination to contemplate the sins one needs to repent and which spiritual growth to focus on during Lent.

In the past, it also served as a way to ‘get rid’ of the stocks of whatever luxury one was to give up for Lent. While Lent and Fat Tuesday are rooted in the Christian religion, as with anything, they have evolved over time to mean many things to many people.

Many people observe Fat Tuesday as a way to celebrate life and their community. In the South, Mardi Gras is an identity, a tradition woven into the fabric of people’s festive spirits. 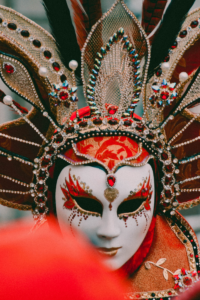 Mardi Gras’ originates from medieval Europe and came to North America in the late 17th century as a French Catholic tradition.

The Le Moyne brothers led an expedition charged by King Louis the XIV to defend France’s claim on the territory of Louisiane, the now U.S states of Alabama, Mississippi, Louisiana and parts of eastern Texas.

In 1702, one of the brothers founded the first capital of French Louisiana in Mobile, Alabama. A few years later, French settlers organized American’s first Mardi Gras party in Mobile.

As the demarcations and settlements grew, those first traditions followed the settlers and continued to grow.

When New Orleans was established in 1718 by a Le Moyne brother, Mardi Gras followed. By the 1730s, Mardi Gras was celebrated brazenly in New Orleans, but not with the parades we know today.

It was in the early 1740s when Louisiana’s governor, the Marquis de Vaudreuil, established elegant society balls that would become the blueprint for the New Orleans Mardi Gras balls we know and love today.

Secret Societies and Krewes are the Backbones of Mardi Gras 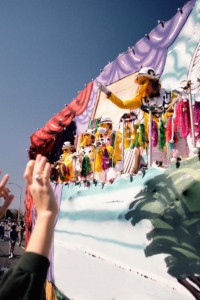 Each parade and ball is organized by a private, non-profit social club with restrictive membership policies.

In New Orleans, they are called Krewes. The first informal society was known as a mystic (or secret) society, formed in 1711 in Mobile, where they are still called Mystic Societies today.

For most of Mardi Gras’ history, the membership to these societies has been secretive, staunchly hidden from the public (much to government’s dismay).

This first society paraded and threw balls from the early 17th century to the 1860s, naming itself “Boeuf Gras” (Fatted Ox).

The procession was held with a huge bull’s head pushed on wheels by 16 men until an actual bull led the way signaling the coming of the Lenten meat fast.

There are more than 70 secret societies (or “Krewes”) involved in today’s Mardi Gras festivities. The list is as impressive as the names.

There are the famous ones like Krewe of Rex, Bacchus, and Zulu but have you heard of the Krewe of Chewbacchus (mix of Star War lovers and party lovers as Bacchus is the love of wine) or Krewe of Rolling Elvi (that is plural of Elvis and yes they are on all scooters and dressed in full sequin Elvis suits).

Each Krewe Chucks Party Favors at the Crowds 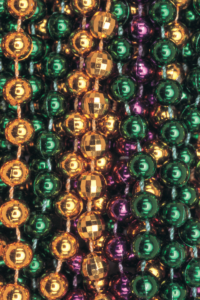 Parade floats notoriously give out “throws,” which are exactly what they sound like: objects thrown into the crowd. They range from coconuts (given by the Krewe of Zulu) to stuffed animals or gold doubloons (by the Krewe of Rex).

Doubloons are medallions that depict the parade theme on one side and the Krewe’s emblem on the other. They have become collector’s items.

Beads are the most popular throws, which are given by almost everyone. A known code of asking for throws is to shout the phrase “throw me something mister”. It’s considered a great honor to receive a throw.

When you think of Mardi Gras, you most likely think of the parades but there are plenty of other traditions too. Each krewe has a King and Queen who work all year long to throw a giant, spectacular ball.

Some are so big they need the Superdome to house everyone. Their identity is a tightly guarded secret until the night of the Ball.

The Traditional Colors are Purple, Green, and Gold

The legend has it that the purple, green and gold color swatch was chosen by the newly formed Krewe “Rex” to put on a spectacle of honor for the visit of  Grand Duke Alexei Alexandrovich of Russia to New Orleans in 1872.

Also in the minds of the founders of Rex was the desire to lure tourism and business to New Orleans in the years after the American Civil War.

Apparently, those were the colors of his home. Since, this neatly packaged version has been contested but the color scheme has remained.

The meaning of the colors came in 1892 when the Rex parade theme “Symbolism of Colors” gave meaning to these colors. 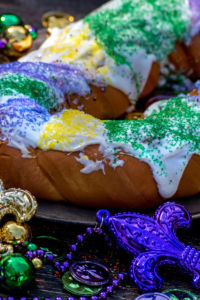 King cakes are as important in Mardi Gras as the beads being thrown  – especially in New Orleans where hundreds of thousands of king cakes are consumed every year.

Each King Cake has a tiny baby inside (most likely plastic now, but if you are lucky you may find a porcelain or even gold baby).

The tradition dictates that the person who receives the slice of cake with the baby in it has to throw the next king cake party.

The king cake custom is believed to have been brought over from France in the 1870s. Formally, King Cakes were a simple ring of dough with a little decoration. Now, we’ve turned it up a notch.

After the rich dough is braided and baked, the top of the cake is coated with delicious sugar toppings in the traditional Mardi Gras colors of purple, green and gold. Recently, many bakeries use King Cakes as an opportunity to show their creativity, topping their cakes with different flavors of cream cheese and fruit fillings and offering them in various shapes. 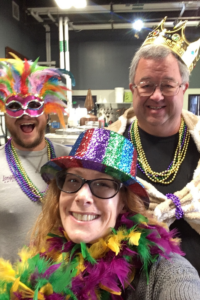 We don’t hide crazy, we parade it down the street.

Mardi Gras at the Cidery 🎭

You will be guided through all the steps of painting Mardi Gras inspired masks, all while enjoying delicious St. Vrain Ciders. But when the painting is finished the fun doesn’t end there…

Sabrina will go on to demonstrate and instruct you on the fine art of paper quilling and you will get to add your own 3D quilled elements to your painting giving your mask a twist that will make it stand out.

Feathers, sequence and maybe a little bit of environmentally friendly glitter for all here in the tap room! Come listen to our Mardi Gras jams with a 12 oz pour, flight of 4, or a 12oz. Kombucha on tap and get the materials necessary for the craft.

Join the Krewe of Longmont alongside Longtucky Spirits, and Mojo Music School to march down the street showing your Mardi Gras spirit. 🎉 Bring your festive spirit and your decorated wagon and come join us for Longmont’s Tiniest (or Tiny-est with local legend Tiny as the Grand Marshall) Mardi Gras Parade

We’ll be there all day with family and friends for an afternoon of carnival festivity with prizes, music and barrels of laughter.

Who doesn’t have a pile of Mardi Gras beads just waiting to be re-purposed?!

Break them out with us in the taproom and let us make drink coasters to add to your Fat Tuesday decorations! 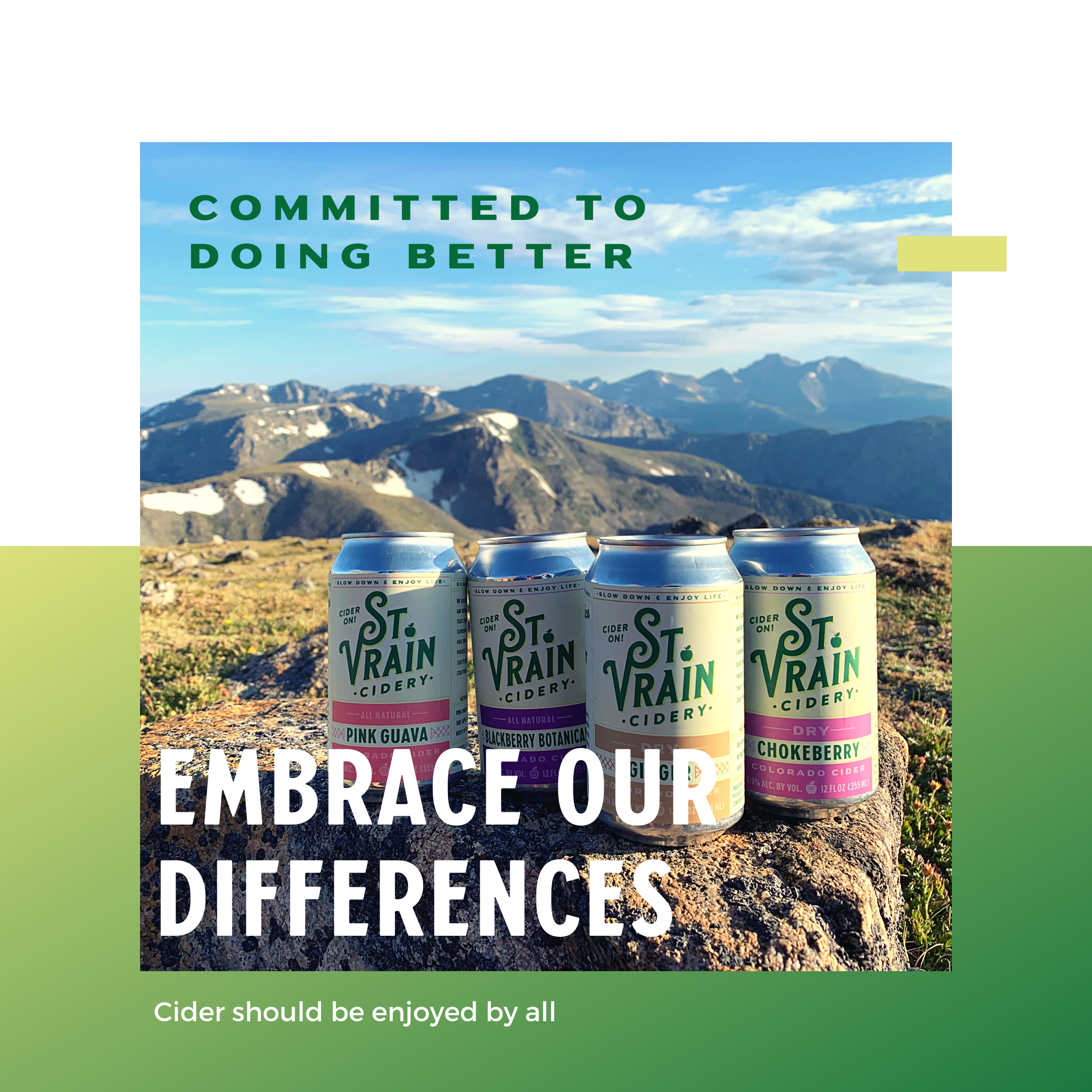 A Discussion on Diversity- Cider, Education, and The Future

Any cookies that may not be particularly necessary for the website to function and is used specifically to collect user personal data via analytics, ads, other embedded contents are termed as non-necessary cookies. It is mandatory to procure user consent prior to running these cookies on your website.